What's your way of the Ninja?!
Would you like to react to this message? Create an account in a few clicks or log in to continue.

What's your way of the Ninja?!

What's your way of the Ninja?! :: IC- In Character :: Atlas of Hidden Villages :: Sand Village

//If you are a Sand ninja and want to take part in this, post your PN: the character is under on your initial post here + the current rank in the post and lets have fun with this. ^^ Italics are background info you wouldnt know IC, but is needed for the overall general plot and info. There will be in game events, but a lot of the stuff will take place here as well.

It began with the mass of handseals in a secluded spot in Wind Country. Four members dressed in black coats with red clouds began the ritual of old. Not far off from the outskirts of Sand they were.
"Here.. this will be glorious!" , shouted a man with black hair and the gurasugan. Another woman with bright blue eyes and a giant zanmato katana smiled with sickening pleasure as she sliced her hand and said, "With this old jutsu... we can put the Sand Village in such a mess that... it will be sure to draw out those two Sages... the Scorpion Sage and the Behemoth Sage." The other two figures didnt say a word as they added thier blood to the circle and began channeling thier chakra into the seal on the ground. "What's wrong Riku? Dont want to have a little fun?", the man with gurasugan laughed. "No... fun is cool.. but slicing my hand open and calling forth massive rain storms... that's work.", the golden eyed doukagan user muttered. His black skin made him near indistinguishable from his coat, and the dreadlocks only gave him the appearance of a scary black mass. Then we look at the fourth man who says nothing.
Then the rain clouds began to form over the Sand Village, black as night and could be seen for miles and slowly but nothing fell from them as this was only the begining of the Ritual of Dark Clouds: Rain Storm of the Ages.

The rain clouds wouldnt alert much attention of the common folk as they rushed to thier homes, but Gaara the Kazekage found them suspicious. He rose to the highest point in the Sand Village and began to observe them, glaring slightly as he traveled back down and sent word out for a meeting with the Sand jounin and thier squads. ".... Tell them...to come quickly...", is all the Kazekage had to say before the messengers flickered off without hesitation.
_________________


toweling off from his usual dip in the oasis Akykyo notes a strange activity in the sand jonin, after a brief stop by Kanya-sensei's home he curiously makes his way to the village proper. 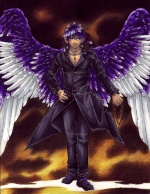 Akane races around Suna as part of her daily training ritual when the storm clouds catch her eye
*(Rain?... but it's not even in..)*
Her Mind suddenly jump-starts remembering the missing nin and the scroll she and Aky recovered
*( Ah! I forgot all about that scroll! I need to turn it in to the Kazekage!... He's gonna kill me for sure when He hears I've just been carrying this thing around with me..) T.T*

*He looks up from the rock he stops at to rest from his daily training out in the dunes of Wind country* Rain clouds? *He stand looking at the sky* Thats not normal, I best get back before I get stuck out here. *he darts across the sand dunes heading to Suna*

She would be sleeping in the sun, with her fan beside her laying in the sand, she would notice a raindrop, "Rain!? In suna...This is weird but I better get inside a building" She would open her fan get up and lift it above her head so she didn't get wet, and head into the clinic

And the four figures stood atop a mountain-top as they watched the chaos laughing to themselves as the rainclouds thickend and began to drizzle slowly. The man with the gurasugan spoke with such arogance , "And now.. we wait for the sages to appear. They will appear and when they do.. we strike. We'll let master's Sasori and Deidara take care of the jinchuuriki they call a Kage." They all resume thier glee filled laughing as they flicker two by two into secluded spots to await the appearance of the sages.

And the letters reach the Sunakagure jounin as they speed to the Kazekage to learn of the situation. A mass meeting of Sand ninja in the Kazekage building. Something that cannot be ignored by anyone in the Sand Village.
The Kazekage rises to speak with his brother and sister on either side of him.

Patting Choi affectionately he shakes his head at the sensitive shinobi "We ran into a similar issue earlier, I am sure Lord Kazekage has an idea of whats going on"

Name: Akane Arata
Age: 14
Rank: Genin
Element: Wind
Specialization: Ken Nin and Taijutsu
Past Accomplishments: Has survived four encounters with Akatsuki, in one situation helping to disrupt a ritual they performed, and in another escaped saving The Sage of the Western Winds (Aka The Scorpion Sage)

What's your way of the Ninja?! :: IC- In Character :: Atlas of Hidden Villages :: Sand Village